lgBt History Month in the North 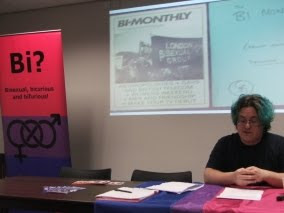 As a part of the events for LGBT History Month, I spoke at a BiPhoria event in Manchester earlier this week.

There was about a half-hour of me talking about the evolution of the bi scene in Manchester over the last 30 years and exploring what I've found so far in looking at stuff from before I was around, in the 1981 - 1993 era. Then there was a kind of Q & A / share your memories discussion for about an hour which was brilliant and I hope some of the people who brought things up there will carry on talking to me about the stuff I don't yet know!

It's been quite a fascinating bit of research, reflecting how far we've come in some ways and how stuck we still are in others: in particular a council with one of the best reputations on LGBT in the country yet with a gulf between their delivery on LG and the rest, and a particularly sharply defined sense of 1980s gay and socialist-feminist politics. And I know I'm just past scratching the surface, with various sources now in mind for where to explore next. Damn but it's addictive!

I've learned things I never knew about the evolution of the bi spaces the city has had, and discovered there's way more than you can fit into a half-hour so started picking particular narratives to explore in the story. And I promise to write it up properly over the coming year to record our history rather than just let it sit in my head.
Posted by Jen at 13:49