The polls are open...

I'm off to vote Remain!


I’ve been sitting on this for weeks now but at last it is public: today’s Queen’s Birthday Honours List names me among the many others recognised for their work.

So from today I’m Jen Yockney MBE, which is one of the weirdest things I could imagine.

The Honour is for my extensive volunteering work with the bisexual community and on wider LGBT issues over the past couple of decades, whether with BCN, BiPhoria, Bisexual History Project, the Bisexuality Report, Bi Life, Bisexual Action, LGBT+LD, lobbying of ministers and GEO, or other things that just now I’ve forgotten.

When I saw the full citation for my activities – and all unpaid – it did come as a bit of a frightener.  By doing at least something every month for such a long time it adds up and by now I have done quite a bit.

In the 80s I was a teenager, following the progress of Clause 28 in the broadsheets but still in the closet about gender and sexuality both to others and myself.

I started to come out and get engaged in community organising and LGBT politics in the 90s, with student groups and the like. I found that they were very LG in their LGBT, with bi people, voices and experiences silenced and sidelined. This meant seeking out bi and trans spaces: at that point my activism could have gone either way, but the bi spaces I found were perversely more inclusive of gender diversity than the trans spaces.  Don’t take that as meaning either that bi spaces were perfect – they definitely weren’t! – or that trans spaces were all dire: it’s just the balance of comfort between the two, then, for me.

Over time I came to be involved in different projects.  Publishing magazines and pamphlets and lobbying local and national government and LGBT organisations can be removed from ordinary lived experience so I’m glad to also have BiPhoria keeping me - I think and hope - grounded in the day-to-day challenges of bisexual life for ordinary bi people.

The high points have included the first full-colour issue of BCN, the huge scale of the two Manchester BiCons, and being the first representative from a bisexual community project to be invited to the annual 10 Downing Street LGBT reception.  And now, of course, today.

Brexit would drive us to drink

Wetherspoons - who aside from this story are some of the best pubs going and have helped raise standards across the pub sector - are notoriously throwing beermats around the place with a weird set of claims to try and encourage a "Leave" vote in the referendum on June 23rd. 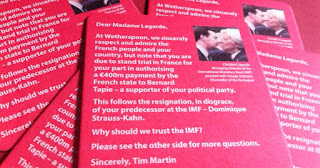 I can't help but notice that an economic future where we are poorer and with more reason to drink to drown our sorrows is exactly in Wetherspoons' interests. Hmm!
Posted by Jen at 13:37 No comments: