How LGBT is your LGBT Pride?

About ten to fifteen years ago, there was a trend of "lesbian and gay" organisations and events in the UK shuffling over to  calling themselves LGBT, or "lesbian, gay, bisexual & transgender".

London L&G Pride and the L&G wing of the Lib Dems were the first I noticed make this change, around 1996. Slowly other Prides and LG(B)(T) organisations around the country followed suit. We've advanced to the point that now, fifteen years on, it looks a little peculiar when you see something that is, at least on the label, LG rather than LGB or LGBT.

But changing the label on the tin is one thing, how far have we changed what's in the tin?

This came back into my mind as I was bumbling around the Manchester Pride website this week. I'd never noticed their Pride Surveys before, but here were some remarkable results.

At the 2008 and 2010 Manchester LGBT Prides, they conducted some kind of survey of attendees.  Each time the best part of 1000 people were interviewed, so you would imagine there was some degree of statistical validity to the findings.

I'm going to put trans/cis matters to one side for a moment and ask: what did they show on sexuality?

Lesbians and gay men form the lion's share - 80%+ - of those attending. The next largest sexuality grouping is heterosexual people. Bisexuals only make up about 7% of those attending - a tenth of the attendance by gay and lesbian people.

A remarkable statistic, that hugely underlines the need for bi work and bi visibility at that event, given every study of sexuality worth reading finds more bisexuals - especially when it comes to women - than gay and lesbian people.  It is on a par with the stats from Kairos' London LGBT Almanac, which suggested that of all LGBT service users in London, only about 6% were bi.

It would seem we have a long way to go yet before the label "LGBT" really means it.
Posted by Jen at 19:19 No comments:

One of the enduring strengths of bisexual community focused activism or bi organising in the UK over the last three decades has been the arc of newsletters and magazines giving us a tangible existence outside of groups and events. You might be fifty miles from the nearest bi social meetup and nine months from the next BiCon, but there was the prospect of the secret newsletter of the bisexuals dropping onto your doormat any day now.

Originally there was Bi Monthly, which grew from the newsletter of the London Bi Group in the early 80s to being a national forum for bis to talk to one another.  When that ran out of steam at the end of the 80s, a successor grew up called BiFrost.  It ran for four years and 40 or so issues, some of which were slender and others quite chunky black-and-white magazines.

BiFrost burned bright and then burned up, and in its place came Bi Community News, or BCN.  That started in 1995 and is still around today, as the magazine cover with Gwen and Jack from Torchwood above will suggest.  With over 100 editions published it's now got glossy with a splash of colour, comes out six times a year, and is one of the two best queer magazines in Britain. As its editor for the last decade, I am entirely unbiased when I say that! 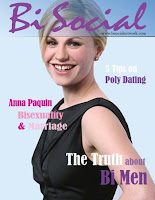 What always seems peculiar to me is that BCN and its counterpart in Germany BiJou seem to be the two big names. Because in the USA things should - to my mind - be at least five times as good. After all, they have a much bigger population than the UK does, and economies of scale in print should mean that a magazine with five times the sales of BCN can do quite delicious things in being bigger, brighter, more colourful and having a higher profile. I've thought enough about what that shift in numbers would do for us here to feel sure of that.

Yet - with all the love I have for the Boston-focused Bi Women newsletter, there isn't anything quite like BCN that seems to have such a national aim or reach. I'm not aware there's even more than one bi magazine in print in the USA any more, since North Bi North West and Bi Tribune folded a few years ago and more importantly since legendary 90s bi and queer magazine Anything That Moves shut down.  There is the Journal of Bisexuality but it's an academic quarterly book rather than coffee-table reading.

So it's good to see Bi Social Network trying to break out of that with its bid to launch an offshoot Bi Social magazine, albeit as an electronic magazine for most editions with inky print specials.

I grew up addicted to magazines, the things I was passionate about as a teenager were there in piles of inky paper by my bed, be they Private Eye, Smash Hits or the geekier end of the home computer magazine pool. That might be colouring my judgement, but for me print publications - things you can hold in your hand, leave next to the loo, spill coffee over at breakfast and leave to dry out over the radiator - mean much more than electronic ones.

So I hope that - though their original fundraising plan seems not to be going as well as you'd hope - Bi Social Network can get their magazine into shape and into print too. America could use a vibrant bi press, and the sense of a little competition from over there could only do good things for BCN and BiJou too.


(However, if you're in the UK, BCN needs your donations more than BSN does!)