In a little over five weeks' time it will be Bi Visibility Day.

I made a little linky graphic for the BiMedia and Bi Community News websites to highlight Bi Visibility Day and act as a link image to take people to the hub webpage about what's happening that day: september23.bi.org

Feel free to borrow it to make your own links there. Right click, save to your desktop, upload with a link through the september23.bi.org...

By way of boosting bi visibility in general, I'm trying to give the date what additional profile I can, but I know I can't do it all on my own :)
Posted by Jen at 18:40 No comments:

Vote Bi in the Gay Awards! 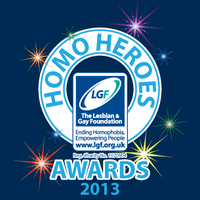 Please help give bisexual visibility a boost from your armchair by voting for me in this year's Homo Hero awards!

﻿The shortlists for the annual awards have been revealed, and I'm delighted to have been shortlisted for LGB Role Model of the Year. It was all a bit of a surprise really, I knew one person had put in a nomination for me but didn't think it would go anywhere.


Why me?  Well, y'know, I've done a thing or three for the bis.  Editing a print magazine for over ten years, running a regular local social-support group for over fifteen years, organising networking and visibility at LGBT and mainstream conferences and prides, championing Bi Visibility Day, doing silly and sensible outreach and visibility work from Getting Bi to the Bisexual Recruitment Army. Being an out & proud genderqueer bi person in so many lesbian and gay focused LGBT meetings, giving neat binaries a little wobble with judicious use of the word "and" when confronted with too much of the word "either".

The Homo Hero awards are run by the Lesbian & Gay Foundation, which is the UK's largest LGB health charity, yet which doesn't have a B in its name. I'm amused at the idea of bi-ing the gay agenda of a "homo" awards do, so please help me.  It'll take a few clicks and an email address.

You can go and vote here at the Homo Heroes webpage. Role model is the third category down, where you'll find a lovely picture of me with my hair all blue and blonde.

21 people or organisations are nominated across 7 categories - you can vote for some or all of the categories, so you can just vote for me or vote in other sections too.  Two years ago there were three bi community activist nominees shortlisted - me, Natalya and Marcus - and one bi project, BCN, but last year none made the list.
Posted by Jen at 11:45 No comments: