Today was Manchester City Council's nearly-annual LGBT Consultation Day. They didn't have one last year but that was a blip: it's been annual otherwise since about 2006, and the last two or three have been titled "Lesbian, Gay, Bisexual & Trans" rather than the 80s throwback "Lesbian & Gay".

There are many other things I want to say about it, but the first needs a post all of its own I feel. About four such conferences ago, I raised the problem of the loos. There are male and female toilets marked... but an LGBT event in this day and age will bring not just cismen and ciswomen and transwomen and transmen, but other trans folk too. Genderqueer, fluidly gendered, nonbinary, whatever your choice of term. And, like everyone else - especially after slurping down town hall coffee - they will at some point in the day need to go to the loo.

Alas, as I say, I've raised this one on feedback forms and in person several times with regard to Manchester Council. They're still not getting it.

It's one thing I'm delighted about within bi circles: wherever they can negotiate such things with venues (which, after all, can be run by people who are a bit lacking in clue on this) the bi events around the UK have for the last many years had ungendered toilets. Happy little signs on the doors "cubicles & urinals" or "cubicles only", or suchlike. There was a bit of a stir at 2010's BiCon when such signs weren't up: it was simply that the desk team had not yet had enough people there long enough to get round to ticking that one off the long to-do list that setting up a transitory bi space can involve.

Bi events, with no staff, no access to the site beforehand, and so forth, can manage this. It's no longer cutting edge stuff. So when we put on events aimed at the LGB&T communities, and in particular given the huge space of the venue and resources at the disposal of a Town Hall putting on its long-planned own events - if we are calling them LGBT, seriously, can we make them LGBT? Not LGB-some-T-and-some-hopping-on-one-leg.

(Naturally, I'd like it if other spaces were accomodating of the need for a wazz too, but if you actually put the "T" on the label...)
Posted by Jen at 16:55 No comments:

Meg Barker made a video for the Open University talking about The Bisexuality Report.

I ripped it and added subtitles last night for all the people those help when it comes to videos.  Here it is:


I'm hoping this won't be the last of the video material about the report - I'm having a few teething troubles with the footage from the launch in London ten days ago but hope to have something up online soon :)
Posted by Jen at 20:47 No comments: 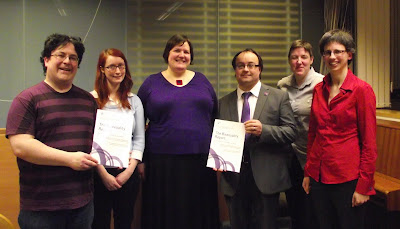 Eight months in the making, The Bisexuality Report is finally here.

Pictured above, 6 of the 7 authors at the launch in London at the Open University: the launch also heard from the Metro Centre, Stonewall and the Government Equalities Office about their takes on the report and why they were variously pleased to receive or endorse it.

Meanwhile you can read about it in a series of stories at bimedia.org/bireport
Posted by Jen at 20:44 1 comment:

Having our cake and eating it

It's good to see as a new wave of Lib Dem subgroups present themselves to the world that Lib Dem Friends Of Cake has now reached 76 supporters.

The other ginger groups may say they have cookies, but we have cake. Mmmmm, cake... ginger cake. Definitely winner of the Best New Lib Dem Faction Award at the 2012 LDV Bloggies.
Posted by Jen at 10:34 No comments:

Email ThisBlogThis!Share to TwitterShare to FacebookShare to Pinterest
Labels: ldb

As a foolish thing to do for the BiMedia bisexual news website, I'm trying to mark LGBT History Month this year by giving a little dash of visibility to a different bit of bi history each day of February.

Like a lot of LGBT work, History Month resources and events in my experience tend to be good on the LG bits and frequently good on the T strand but often the B is weak. But there has been plenty of bi history:albeit sometimes things we need to (re)claim. I have an assortment of ideas of things to highlight, and at one event a day that's just 26 more to go...

All that said, I could use your help, dear intermaweb people. I don't really want a calendar that is just about the things that seem important to me. For all the obvious reasons I remember less about bi men's projects or BME stuff. I never watched This Life or Queer As Folk. So a calendar all of my own would be skewed toward lefty things, Northern things, Radio 4 and suchlike.

So please do suggest – whether a person or event – a little bit of bi history you think a bi history timeline should include. It might just be a name or an event, it might be you could add a paragraph or two about what it was and why it mattered (or who…) – and whether you want to be named yourself or keep it an anonymous submission.

Hopefully by the end of the month we may have quite a Bi History timeline getting going, which can then be built on as a resource for bi visibility in LGBT History Month in years to come. Drop us an email on historymonth@bimedia.org
Posted by Jen at 00:14 No comments: