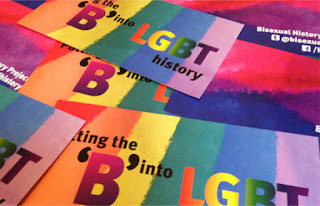 In February 2005, the UK marked its first LGBT History Month.

I loved the notion: although looking back over old correspondence it seems that the organisers were perhaps collaborating on something to be marked in the more progressive schools around the country, the wider LGBT community heard about it and picked up the idea and ran with it.  So while there were no doubt a bunch of schools events (at thirtyish I wasn't really the demographic to hear about them!) there were a host of other things besides too around the country aimed at the LGBT community in general or anyone LGBT friendly in wider society.

But it was quite lesbian-and-gay despite the name.

Lots of bi and trans people felt left out and some of us decided to do things about it; but to be honest, it was much more something that got picked up within the trans community than the bi community.  So the next few years there were a host of trans events, and a slight downturn in the amount of gay and lesbian stuff - the second and third years of things often see a bit of a downturn as people who had one idea struggle to work out what to do the second time around - but there wasn't much for bis.

In Manchester we had a talk about interpretations of bisexuality in history over the past 3,000 years.  The odd person or group here and there did a talk that didn't really have much to do with history but was perhaps their latest bi research being presented, but it felt very much an LGbT History Month.
By 2013 I'd had an idea.  There has been lots of bisexual stuff that has gone on over the years, and a growing number of high profile openly bi people or depicitions of bis on TV and in film.

There have also been a lot of erased bisexual contributions to our LGBT history, When the story of the decriminalisation of sex between men in Wales and England is told, for instance, we all hear about Labour MP Leo Abse and Conservative MP Humphrey Berkeley, but there is far less mention of Tory peer Lord Montagu or Roy Jenkins (later leader of the SDP) and the role they played as bisexual men without whom the law would likely have taken many more years to change.  If we rely on the sources of the gay and lesbian press we'll never remember the stories of things like BiCon or the bi ban at London Lesbian & Gay Switchboard.

And so I built bisexualhistory on twitter and its facebook twin bihistory - each sharing in so far as I can manage at least one thing every day about bi history.  "On this day in..." they go - they are all anniversaries or birthdays or the like.  Usually with a link to a news article or wikipedia page so you can read more on the thing in question. 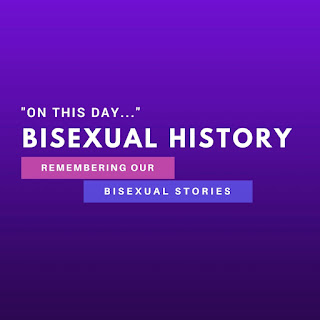 As well as reminding (or teaching!) you of a little dollop of our bisexual history each day, they give an easy way to remind other people about your bisexuality - retweeting about famous bis or bi events is a subtle reminder but one no-one can accuse you of "ramming it down their throat" over, you're just retweeting a happy birthday message to Anna Paquin or Sara Ramirez or what have you. And for allies it's a really easy way of gently showing support through the year.

I'd love people to submit more dates for the calendar. Maybe you know a few or would like to help out by researching some.

And meanwhile the Month has grown like topsy the last few years with a host of events including the big "Hub" events around the UK - more than a dozen big LGBT history festivals at museums around the country and even with a couple overseas joining in.


So happy LGBT History Month. Even if it's not LGBTHM wherever in the world you are!
Posted by Jen at 07:30 No comments: