Doing the bisexual community info outreach stall in Sheffield last weekend, one of the conversations I had with quite a few stall visitors was about the Bisexuality Report. What was it; why it was useful; how it came about.

Each time I started along the lines of, "think back to 2010 after the Coalition Government was formed? One of the good things was, because it was a formal coalition, they laid out on paper what they were going to do. On LGBT issues there was an LGB&T Action Plan. It was incredibly helpful for people outside Westminster, outside the well-funded London clique groups like Stonewall. Because now we knew broadly what to expect and when, so we knew: this thing should come up next May, we have time to prepare and know what to look for, and what to chase up on if it doesn't seem to be happening." That then led onto talking about how the LGB&T Action Plan lacked a bi strand and evidence base, which gave momentum to the "Bi Life 2" idea and led to my proposal for the Bisexuality Report in 2011.

Having a coalition government meant a written plan with a timeline both parties had broadly signed up to.  Prior to 2010 there was never that kind of open agenda: to know what was going to happen next you had to be part of the Westminster bubble. You had to already be in the clique in order to influence the clique. Here instead was an open plan for all to follow.

Of course it hasn't meant that as grassroots community group organising types we magically have gained offices, staff and so on. But within what unfunded projects can do it has been massively better.

Which parties are involved in the next government will affect what winds up in any new five year agenda for action, but from the perspective of the less cash-heavy end of the third sector, I do hope it's a coalition. That way we all have more chance of engagement with what happens from here to 2020.
Posted by Jen at 23:34 No comments:

After going to the Sheffield ZineFest the last two years as a participant (writeups here and here) this year was the big leap into the unknown of taking a half-a-table to share my goodies with the world for the first time.

It was also the first time going in a car - with my strongarmed co-stall-volunteer - which is just as well with having to be there on time instead of roll up when the train network feels like getting you there, as well as there being someone else to guilt you into getting up and setting off at the right time rather than having a lie-in.


It's a different day out as a stall-holder.  When you're away from your stall, like a nervous parent, a quarter of your brain is doing radar pings of your stall: do I need to go back and talk to whoever's visiting the stall now? Have I made sure the person looking after the stall has a nice hot cup of tea? You get to be jealous of the other stall holders who are definitely getting much more attention (it's a bit of a red herring, as you only notice this in the bits of the day when your stall isn't busy).  And you really notice the different styles of interaction of people who come up to the table.

My usual frustration at zinefest stalls is a lack of labelling - something that looks artsy and has an enigmatic name on its own is intriguing, in a room of 100 such things it's just annoying - so slap bang in the middle of the BCNs was an explanation of what it is and what kind of reader might like it, and similar notes for other things on the stall.

To step back though - the Electric Works remains a very pretty building and as in the last two years there were loads of stalls sprawled out over the ground floor. My impression was that there were slightly more stalls again than in 2014.

It was sad this time to find fewer workshops going on and no equivalent to the "100 years ago" display and "Sheffield history" live artworking of the past two years. The art and bigger workshop schedules were fab things to have and helped the less outgoing attendees' participation, I think, but they take some finding and instigating - it's not meant as a big criticism of the organisers who finessed a whole host of stalls into place. I umm'ed and ahh'ed about putting in a workshop offer but didn't quite feel I had enough of the right roots to run a session at Zinefest, and also thought tabling for the first time was enough of an adventure. Baby steps.

We didn't take enough to cover the cost of having a stall. While it would have been good to do so, that wasn't the real aim: this was about getting the word out and sharing info with people who would benefit from it.


A pile of BCNs went and my stockpile is about 70 copies of Getting Bi lighter. Lots of my hastily-made Northern Bis flyers were taken with the aid of "where are you from? ah, there's a bi group there, here are the details" conversations. We're in a weird uptick time in bi group organising in the North: two years ago such conversations would have gone "Manchester's nearest to you then" almost every time, but now we have a bit of a blossoming with meets in Leeds, Sheffield and Liverpool.

There must have been some political thingy or other on nearby - some people showed up wearing Labour pin badges, and were were noticeable for making sure they got seen without actually giving any support to what was going on, and avoiding actual eyecontact or conversation.  A (I googled and discovered Lib Dem) council candidate who was not badged and stickered up came by too, did actual talking in order to learn about things and find out what she could pass on to appropriate people locally, and gave us some money for some of the things she was taking.

Being a bit ziney and a bit strand-of-LGBT-community-info, ours was a stall with specific niche appeal, but there were really good conversations with perhaps 25 people through the day, and only one visit that could be described as consisting of "eww bisexuals are icky hahaha".

I see on my newsfeed that Blogspot.com is no longer going to kick out the more "sexually explicit" blogger blogs.

Good, and thank you for taking a more sensible approach, dear hosts.
Posted by Jen at 16:57 No comments:

It's been another good week for bisexual representation: in case you missed them, Catwoman came out on the weekend while the lead in trashy sci-fi fun The 100 was outed as bisexual between an on-screen kiss and a producer's tweet. And of course I was in the local news.

It all inspired this happy graphic: 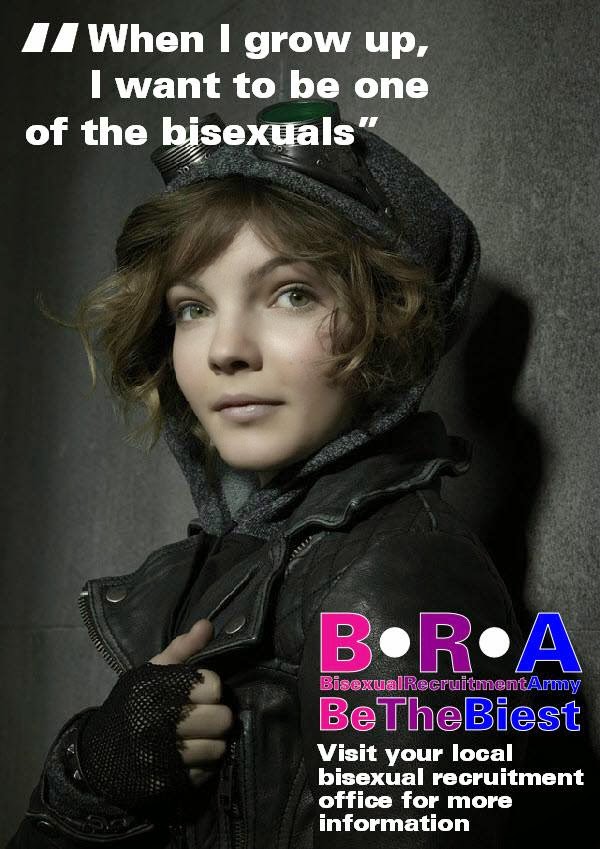 It'd be good to get some people who aren't young, white and cisfemale* next week though. Still, a half-full glass is better than no beer and no glass.