The Eagle has landed

Angela Eagle's Labour leadership bid has come to an end after it took flight like one of those flying machines that launch off a quayside and measure their success by how many inches forward they make it before splashing into the water.  A few ill-starred launches and lots of online and real-world harassment by Corbynites and it soon became clear that her pitch for the top job lacked the required momentum.  No pun intended.  I'm no fan of her or her right-wing politics but it's hard to imagine anyone not feeling for her at a human level when every press conference seemed to be jinxed by the Tories.

Now it would be easy, and entirely correct, to highlight how the campaign of intimidation, violence and homophobia unleashed by one side of Labour onto the other in response to her leadership campaign is just a variation on the tradition of initimidation, violence and homophobia used by Labour against its opponents throughout recent years.  It would be easy, and entirely correct, to observe how that Labour-on-Labour homophobic bullying campaign is being reported both by people inside Labour and by non-card-carrying sympathisers as if it were an unthinkable new thing and not a longstanding part of the Labour/BNP shared electoral playbook. When they say it's a shocking new development, are the faux-left being barefaced liars or are they just people who have been conscientiously looking very hard in the other direction for a very long time?

But what no-one seems to be addressing is that the same bunch of spinners who have spent decades rewriting the homophobic campaign that Labour ran in the Bermondsey byelection in 1983 with an imaginary "Simon Hughes the Straight Choice" leaflet, have been entirely at ease about their heterosexual leader seeing off a lesbian challenger by appearing repeatedly at podia with this sign in front of him.

I mean really. Good Labour people, and there are dozens of them in the party even now: if you ever repeated the claims of homophobia by the Liberals in Bermondsey, how the hell have you all remained silent on that?
Posted by Jen at 23:17 No comments:

Well this is embarassing...

At some point I'm going to write properly about the Bermondsey byelection. The one with the homophobic campaign and where the Liberals won around which a lot of nonsense has built up.

Supposedly the slogan "(Liberal or Labour) It's A Straight Choice" was a virulently homophobic attack on Tatchell, despite also being used in the immediately previous byelection as well where the candidates were all, from what I can tell, heterosexual. These days Liberals tend to use the phrase "it's a two horse race" for the same effect.

But there's a peculiar silence in Labour ranks about a ghost of Bermondsey this week.  Angela Eagle has launched her bid to replace Corbyn as leader, which would make her the first out-lesbian leader of their party. 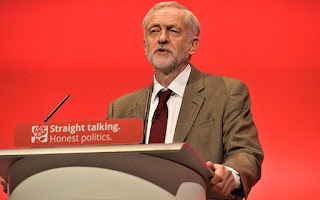 I look forward to the people who have laid into Simon Hughes' election campaign over the years doing a similar demolition job on Jezza.  Especially if Angela does not become leader, in which case on the same basis as the myth of Bermondsey it was clearly the prejudice wot won it.
Posted by Jen at 10:21 No comments: