Here in Greater Manchester we're one of the six English subregions electing new supermayors, alongside places like Liverpool City Region and a sprawling mass of Yorkshire and Derbyshire around Sheffield.

You get to exercise two preference votes in this, so you get to pick two parties or two individuals, but one preference is a dead simple decision - because Jane Brophy's standing.

While I get to ponder who to give my other vote to, for one preference, it's payback: more than 20 years ago Jane stood alone in Trafford against Labour and Tory homophobia, indeed the other day I found a copy of the Delga News reporting the story. 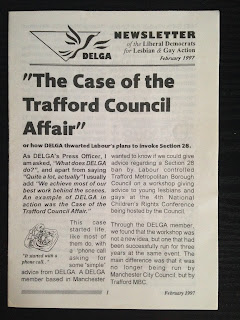 New Labour Trafford had signed up to the UN Convention on the Rights of the Child, and wanted to celebrate the fact in an attention-seeking event that would please the press. Cue a big conference at Manchester United football ground, with lots of sixth-form students from nearby schools bussed in.

However a consultation with those same young people in the Trafford area had produced a list of things they wanted to get from the event, and in those days of an unequal age of consent, no partnership rights, and the freedom of employers to fire staff at will on the grounds of bisexuality or homosexuality, the single most frequently raised issue had been being LGB. Probably not LGBT: it was the 90s remember.

But Section 28 was on the statute books, so even though article 17 of the Convention is the right to information and article 28 is a right to education, the council's Labour leadership and Tory opposition decided it was all too liable to encourage kids to turn gay, and barred such information from being provided at the conference. Even though the previous three such events, held in other towns, had offered the same thing and without a whisper of a Section 28 prosecution ensuing.

As an aside, you do have to wonder how a workshop telling teens that they (if male) had to wait another five years to have sex, couldn't marry or adopt, would be perpetually insecure in their working life, would have lesser pension rights, be more likely to be made homeless and so forth, could be deemed to encourage them to make such a "lifestyle choice". This might be a sweeping generalisation about what people hope for in their futures, but surely it would if anything put them off.

As a local Lib Dem councillor Jane Brophy made a speech in full council challenging this, championing the need for isolated young bi and gay people to be given the information and support they needed. It was great to witness a press storm on the day that saw the leader of Trafford on Radio 4's Today programme and in the Manchester Evening News having to defend her decision to bar young people from learning about their rights at an event supposedly celebrating the council's commitment to doing exactly the opposite.

Anyway, back in those days of the mid 90s LGB(T+) rights were not popular, and when there were no votes to be had in championing them Jane stuck her neck out because it was the right thing to do.
Giving her my first preference vote seems a small thing to do to return the favour.
Posted by Jen at 13:30 No comments: