Words can have several meanings, get over it

I've grumbled this particular angle about the "it must mean either one thing or the other" nonsense for years but finally cracked and made a tumblr-esque version of that blogpost! Honestly, so many words you just look at the context and you get it or you ask for any nuance you might actually need... 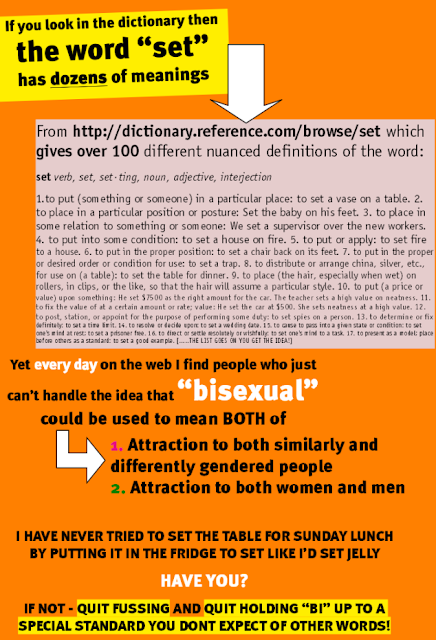 Stonewall have a chunky new bi & gay men's health report newly out, which seems to be the counterpart to the pale-blue bi & lesbian women's report you may remember from about 4 years ago.

There's lots of good stuff in there, by which I mean lots of quite bad stuff but important data to have available for NHS planning and so forth.

Mostly it combines bi and gay data together, however two snippets:


"In the last year, 27 per cent of gay men thought about taking their own life even if they would not do it. This increases to 38 per cent for bisexual men" (p9)

"Rates of self-harm are also higher among bisexual men; eleven per cent of bisexual men have self-harmed in the last year." (p11)

That one feels like one of those simultaneous equations lessons in  maths when I was at school - we don't know how many gay men they have or how many bisexual men but the scores are 7%, 11% and 15%, solve for x and y... but it makes for about 50% higher rates of self-harm among bi men than among the male population as a whole. A sobering thought.

www.stonewall.org.uk/documents/stonewall_gay_mens_health_final.pdf
Posted by Jen at 10:29 No comments:

The only time when we stop counting with someone's age is when they are dead. At that point, your age becomes a fixed thing; no longer is it "(and counting)".

So if Letts thinks it's something worth noting in others that they are still alive... that suggests a baseline view of the world in which being alive marks you out as different.

Keen minds raised on Buffy will naturally want to know: is he a vampire or a zombie? Zombies have an endless hunger for the brains they lack. So that's quite a promising possibility there. On the other hand, vampires suck the life out of others and have nothing to offer the living.

Vampire or zombie? Too close to call.
Posted by Jen at 18:24 No comments:

By Lesbian, Gay, Bi & Trans 'sector' standards, Stonewall is a great big organisation with a turnover in the millions of pounds. It proclaims its mission as equality for lesbian, gay and bisexual people, and attracts flak from a number of directions: not least for being almost entirely focused on lesbians and gay men, and only remembering the existence of bisexuals now and then. Usually, they remember the bis when there is the prospect of money involved.

This has been going on a long time; when I first dipped my toe into queer activist circles in the early 1990s, I fast learned why Stonewall were widely and rightly seen as a joke among bisexual people and activists. They never mentioned the "b word" on their materials except when it came to the bit asking you to donate, when suddenly, bis were very welcome too.

In 2003, when Ben Summerskill took over the helm, my first conversation with him was about bisexual inclusion. A change at the top could be a good opportunity for cultural change throughout the organisation. Alas, it was not to be.

Report after report, press release after press release, soundbite after soundbite, Stonewall 'forgets' bisexuals. Oddly it's the only one of the LGB strands they miss out: I've yet to see them issue a correction to a press statement where they, say, mentioned lesbians and bisexual people and completely forget to refer to gay men. Come to that, they have yet to issue corrections for the times they miss out the bis.

There is a notable exception: their report on the experience of bisexuals in the workplace. When commissioned to do specifically bi work, they remember us. Just as on those donation appeals in the 90s, where there's brass...

And so, as the government's consultation on how to implement same-sex marriage rolls out, Stonewall publishes its response. To one of the questions they say...


Question 8: The Government is not considering opening up civil partnerships to opposite-sex couples. Do you agree or disagree with this proposal?
Stonewall's Answer: This is a matter for heterosexual couples and Stonewall would recommend that the Government consults with them and stakeholder organisations representing them.

The thing is, lots of people who are in mixed-sex couples are not heterosexual. Perpetuating the myth that your relationship defines your sexuality helps perpetuate bisexual invisibility: it is a classic piece of bisexual erasure as identified in The Bisexuality Report (pub. 2012 Open University, endorsers including... Stonewall... talking the talk but not walking the walk).

Now, I can imagine some voices at the back suggesting that maybe this was a bit of a slip-up: that anyone can read a question, fail to spot a certain angle, and so miss something. Most of us at some point have done that in an exam and got back a mark noticeably lower than we thought we were going to get. Didn't Stonewall just make a bit of a boo-boo and we should let them off?

Fair question. But on this one... no. As long ago as last August, Stonewall published their draft of what they would have to say when the marriage consultation began. That ran with the same "being in a mixed sex couple means you're heterosexual" line.

I challenged Stonewall over their bisexual erasure then, here.

What I said then still applies now:

A charity claiming to give voice to lesbian, gay, and bisexual people, really ought to be listening to and giving voice to those bisexual people too - even when it does make the answer on a form a little more complicated.

Come on. A campaigning group that was working for lesbian, gay, and bisexual rights, would be able to remember bisexuals existed all the time rather than just now and then.

And the most frustrating thing is, in discussing the marriage / civil partnership divide that currently exists, bisexuals are a brilliant case to cite for what's so broken. Ten years ago, bisexual people found their relationships were treated differently in law based on the genders of themselves and their partners: today, after so much equality campaigning and the introduction of civil partnerships, that situation is exactly the same.

Bi people get into relationships with lesbians, gays, straight people and other bis.  Gay and lesbian people get into relationships with bis.  We are your queer family.  And LGB equality is only worthy of the name if we break down the barriers around civil partnerships as well as marriage: campaigning and lobbying for anything less puts the lie to a claim to be campaigning for equality for lesbians, gays and bisexuals.

Now, I know from comments elsewhere that the relevant people at Stonewall read that. If this were an accidental oversight last summer, that defence no longer applies. It seems to me that this can only be read as a deliberate and premediated pretence that there is no such thing as bisexuality from an organisation that soaks up the lion's share of funding for LGB work in the UK.

If you're thinking of donating to an LGB cause any time soon, I suggest there are far better alternatives. And if you haven't responded to the marriage consultation, please make sure you do so. And make your submission better than Stonewall's.
Posted by Jen at 17:44 4 comments:

Marriage and Civil Partnerships: Not Quite The Same Thing

With a hat-tip to the Neue Politik blog, this is a good succinct video about some of the differences for people in the UK between marriage and our system of Civil Partnerships. The talk's all about lesbians and gay men, but of course this is an issue that affects a hell of a lot of bisexual people too: there're trans, genderqueer, nonbinary angles as well.

I'll be writing more on this subject here quite soon ;)