Across the UK there are an assortment of local groups for bi people to get social support.

They vary in shape and size greatly - in Manchester and Brighton there are groups which meet up several times a month, and have pub, coffee and community centre type meetups to suit people who feel comfortable in different settings. In London and Birmingham there's a similar range but offered by different, separate groups each meeting less frequently. Glasgow at present only has the community centre meeting model. Cardiff and Swansea do a mix of community centre meets and pub socialising.  In other places, meetups are more ad-hoc with more of a focus on web and email communication between times.

Some do outreach stalls, offer speakers and training, produce resources, research and information.

Every group has things it does well and things it could do better. It seems foolish to each be inventing the wheel in parallel across the country without comparing notes on shapes that seem to be performing well or poorly.

A couple of the groups have really big regular attendance numbers. If other towns can learn from them, that would improve the reach of the support to  bi people, as well as helping increase visibility and strengthen challenges to biphobia. Other groups have delivered or collaborated on research to reflect bi needs: again, good to replicate or learn from elsewhere. Some are much better at engaging new volunteers than others.

So at BiCon last summer, I ran a workshop focused on bringing those groups together and comparing experience, ideas and what challenges we see in front of us. It went pretty well, and led to the Bi Local Groups Network for us to keep talking the rest of the year.  But no amount of email chatter can compare to being in the same physical space with people wrestling the same organiser challenges.

So now a year on we'll have another similar gathering. If you run a local bi group, or are thinking of getting one started, why not join us in Glasgow next month?
Posted by Jen at 22:00 No comments: 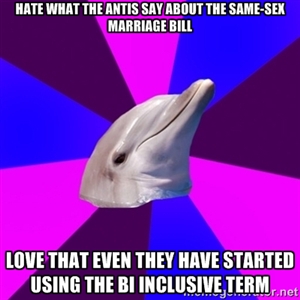 When Meg, Marcus and I - as representatives of Bi Community News, BiUK and Bisexual Index - met with the civil service last year in the wake of the Bisexuality Report, one of the things we pressed was calling things "gay" when that's not what is really meant. Not in the playground way that gay is another word for bad, but like when you mean same-sex couples and talk about gay couples.

Now the same-sex marriage bill for England & Wales isn't perfect. I have a list running up my arm of how it could be better and half of that is in words only about three MPs actually understand. But in everything the government has published about it, it's been called same-sex marriage, not gay marriage. And that being in big letters there on the name of the bill has meant even the opponents of the bill, in the Houses of Parliament, have often used the more accurate terminology.

Sure the debate then descends into talk of "gay couples" (from the pro and anti camps and moreso in the non-bi press) and a whole heap of binary nonsense. We won a small battle not the whole war. But it's good to hear the voices arguing about laws affecting bi and gay people starting to talk about it in language that admits we exist.
Posted by Jen at 13:18 No comments:

One of the things people always want to know about BiCon these days is whether they will be able to get onto the internet.

I think BiCon Treforest was the turning point - before that there was a large puddle of LiveJournal users waiting til they got home for their fix, but I think 2007 is the last time I remember us all seeming to muddle through with just a small room of internet-wired computers for people to dip into.

I haven't spotted any official comment either way from the organising team but I was noodling at the website for the venue and for all four accommodation blocks it lists among the features of the rooms,

Sounds like we will have the internet, folks. But remember to bring a little ethernet cable with your laptop.

I do hope so. I can hardly type accurately for texts on my little phone, never mind trying to post updates to BiMedia and suchlike!
Posted by Jen at 13:07 No comments: