Off the fence: Bi Vis in the Village

I had an idea last month, and after a bit of prep work like finding out who at the council you have to get permission from to do this sort of a thing, I made a banner and - with a gaggle of people from BiPhoria - today we went and hung it on the side of the park on Canal Street. 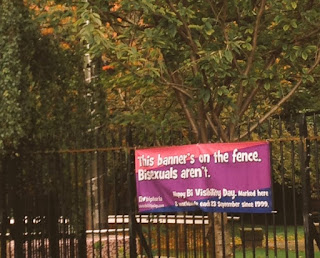 In a city - and especially in a gay quarter - that has often struggled with the B in LGBT, hopefully this banner will last the next couple of weeks, and maybe garner a few tweets and conversations along the way.

With bars that only display in the rainbow and trans flags, I think this is the most visible we've ever managed to get things in the gay village!
Posted by Jen at 22:55 No comments: