De Montfort University* has got in a kerfuffle after awarding its highest honour to David Cameron in recognition of the importance of same-sex marriage and its impact in social progress.

There's a petition here which has that rare quality of being an online petition I can entirely sign up to the sentiments of despite not having written. Far too many throw in peculiar delusions along the way.

How I feel about it all though is a little complicated.
Dave was sticking his neck out in backing the marriage bill: it cost him support within his party (who were divided 50-50 on it in Parliament in the end: slightly against in the Commons and slightly in favour in the Lords) and it surely handed Tory votes to UKIP without which he'd now be sitting on a much more comfortable majority. That does deserve some recognition, though it's sad to say that we live in an era where politicians who spend their political capital on doing something of benefit to others deserves special credit. 25 years earlier if such a law had been enacted his party would have been promising to repeal same-sex marriage the moment they got in. Now it's something they boast, somewhat misleadingly, of having done, and so we can feel more secure of it staying law regardless who runs the country in the years to come. As someone who wants liberation and equality, getting the Tories to 'buy in' to same-sex marriage is a definite plus.
But the bill came not from Dave but from Lynne Featherstone, following the resolution at Lib Dem conference proposed by the party's LGBT+ wing and opposed by Stonewall. As the Liberals have been on the right side of every LGBT rights question since forever on account of their ideology, often on their own, that is seen as a less bold move.
I feel parallels in how I've seen for example Unison's LGBT wing getting praise for bisexual engagement work. Which they have been doing well over the last five years or so and I've been glad to see. Yet my work's LGBT network was pulling in bi activists to do equivalent engagement work in the 90s when LG Unison were telling bisexuals to get stuffed. It's a bit galling for people who did heavy lifting long ago, when it's the comparative latecomers to the party get the praise...
Which is a roundabout way of saying I'd have a lot more time for De Montfort if they'd been giving similar recognition to Lynne and e.g. one of the early pioneers who got us here like Bernard Greaves.
That'd feel like celebrating the change rather than buttering up the PM.
* - me neither. Turns out it's in Leicester
Posted by Jen at 21:05 2 comments:

My speech at Leeds Pride 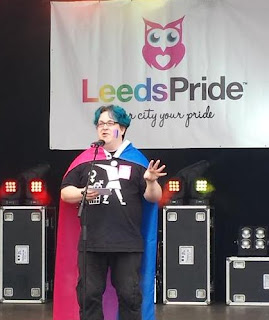 I had the delight of being among the speakers on the main stage at Leeds Pride yesterday.  Here's  what I had to say to the crowd:

"Hello Leeds!  Are you having a good Pride?

​"​My first Pride was in London in 1993, and in those days it was called Lesbian and Gay Pride. I thought: I'm not a lesbian, I'm not gay, I'm bisexual and genderqueer, am I wanted and included in this?  I went along and hoped bisexual would be "gay enough". I didn't know it back then but Pride was invented by a bisexual woman, Brenda Howard, so if you're still in any doubt about the bisexuals being here - at this party, we're definitely on the guest list.

​"​I'm delighted to be here on behalf of Leeds Bi Group, which celebrates its first birthday this month having been formed at the national bisexual festival BiCon a year ago.  If you're bi and in or around Leeds join us at Mesmac, 7pm the second Wednesday of every month.  They say bisexuals want to have their cake and eat it, which is a strange slur, but if you want to bring us cake we're good with that.
​
"​Pride can be an exhilarating event, and I remember the tears I cried at my first one just being surrounded by so many other queer people for the first time.  But it's just one day.

​"The rest of the year there are groups all across the country like Leeds Bi Group making a space where it's OK to be bisexual - in a world that still wants us to fit a simple box of gay or straight.
​
"And we sadly need it. Half of gay and lesbian people think they can't be out about their sexuality at work.  Bi women are only half as likely as lesbians to feel they can be out at work.  For Bi men that falls to just one in eight.

"We may have nearly-equal marriage but in mental health, in experience of violence and more, we have so much still to do. Bisexual, transgender, lesbian or gay, we still die younger than our heterosexual cisgender friends, and that has to change.

​"But that's the fight for tomorrow and the rest of the year. Be proud and have a wonderful Pride today."
Posted by Jen at 07:48 1 comment: