Bi Erasure at the Beeb 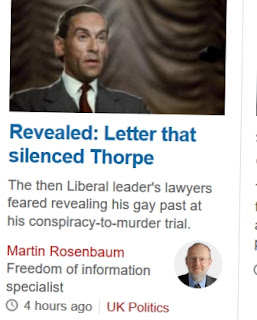 It's over a decade since they were taken to task over reporting about another prominent left-wing bisexual MP, Simon Hughes, as John Pienaar declared that someone who had talked about having relationships with men and women was therefore gay.

Expect a lot more of this as a retelling of the Thorpe saga is heading for TV screens (carefully timed, you note, for publicity just ahead of a round of elections).

There is a simple yet remarkable story that his career was ended by the demands of his ex, which spiralled out of control winding up with the bizarre dog shooting incident. Or there are the takes on it which reflect on how he was seen as a growing threat to the establishment in the UK and to the South African apartheid regime. Choose the level of conspiracy that suits your tastes.

Thorpe was - insofar as one can tell from much distance in time and social strata - a bisexual man whose life was shaped in an era where that had lots of social and legal implications. Like Nigel Farage, a great self-publicist, though with diametrically opposite views.

But as he seems to have had long happy relationships with women, erasing many years of marriage and other relationships away on a "just one man makes you completely gay" basis is below the standards of reporting we should expect from Auntie.

The "bi" part of the word bisexual gets falsely accused of meaning "2" from some quarters, but there are sadly still BBC journalists not capable of counting even that high.


(Not unique to the BBC, of course. Here in the Times for instance.)
Posted by Jen at 18:15 No comments: