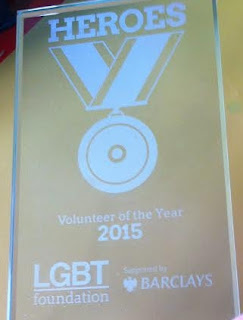 Well there's a turnup for the books. We've had a string of bi nominees for the Homo Hero awards - myself, Natalya, Marcus, BCN magazine - but invariably walked away empty handed. This year they rebranded them to be bi & trans inclusive there were a plethora of trans winners including me.

This time I was up for the Volunteer category.  In fairness it may be my strong suit: an honest biography says I've been doing LGBT volunteering every month, usually every week, for the past twentysome years of my life.  Sometimes big-ticket stuff: running a BiCon, inventing the Bisexuality Report.  Often individual level change, being the first person someone can talk to about being bi, pressing an LGBT group about their failure to mention biphobia and the like.  Sometimes, like a couple of years ago, it's had to be mostly online work when long-term illness has struck or been particularly challenging.

I'd written off any chances of winning to the point that I regarded it as a night out drinking with (oh dear) no worries about whether I would look presentable to collect a trophy.  As the host read out the winner in my category, I mouthed the name of the person I reckoned was going to walk this category.  My somewhat tipsy brain then did a couple of beats of "hang on, that one reading the name out got it wrong" followed by "wait, that's my name".  Those sat round my table were then treated to a gracious yelp of "Oh (rudeword), it's me!"

So a big thank you to an awful lot of people I've never met who seem to have voted for me. You all totally threw me there!


(It's not my first shiny trophy. In 2005 I took the Home Office "Volunteer of the Year" award for contribution to the bisexual community while in 2002 there was a Cake Award from BiCon for, er, well I presume for keeping BiPhoria afloat while most bi groups were imploding, and my BCNning, BiCon running, inventing BabyBiCon and the like.)
Posted by Jen at 08:44 No comments:

The Brighton Argus (and as a result the Metro and I think we can assume the Daily Mail) is up in arms at the news that some survey or other has been given to schoolkids in Brighton which asks about things like their gender. The Argus can't remember the difference between gender and sexuality and ties itseful up in knots while the Metro squeals: 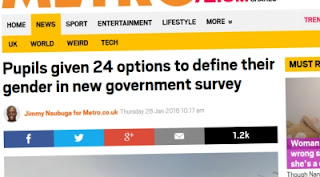 For gender there are 24 options listed. Well, 23 and prefer not to say. OK, 22, plus prefer not to say and a write-in Other box. So either 22 or 23 or an infinite number, so let's put 24 in the headline because it's definitely not the right answer.

"Oh waily waily, the sky is going to fall in" cry the Chicken Lickens of the 1970s who are somehow still grinding articles out for newspapers.

How on Earth will a child - a mere child, with no more knowledge about their sense of gender than actually being that person day in, day out, and spending their whole life being the person who actually inhabits their own damn gender - how will a child be able to tick the right box? When wilfully and conscientiously backward journalists, with no way of finding things out because their feeble minds live in the world of DI Gene Hunt not the world of I'll Just Google It, are not quite sure what demi-girl might mean.

What's that? "It's quite work-out-able and basic a word that if you're not sure what it means you could just say it out loud, think about the two elements, and it's bleedin' obvious?" Not in 1973 it isn't. And that's where we all are, right?  Especially kids born this century.

So yes. 24 options. Basically: good, almost all the pupils will simply tick "female" or "male" and this is not difficult, scary or challenging. For a few they will be able to tick others and by gods what a good thing for them it is to have their existence acknowledged rather than being told they are bad and wrong once again. The lazy hack journalists who have sniped at this need tossing back into the decade where they belong, and leaving there.

If you are, say, happily female, you don't need to know what all the other options might mean when you can just say: that box there, that's me, tick. There are a fistful of names I have trouble pronouncing, yet when it comes to identifying my own name on an attendance list, them appearing on the list too wouldn't stop me finding my name and going "ah yes, that's me".

But to be honest, on seeing the headline what I first think is: 24 options? I do hope they're coded with one letter each from the alphabet, excluding F and M.
Posted by Jen at 21:04 No comments:

Email ThisBlogThis!Share to TwitterShare to FacebookShare to Pinterest
Labels: it gets better, ldb, the abominable british press

The 'privilege' model of understanding the different life experiences that people tend to have according to where in the world or the UK they live, their gender identity, sexual orientation, skin colour and the like has been bouncing about for quite some time. It has some merit.
One of the problems it runs into is the argument that "but not all [grouping] feel the benefit of this leg-up!"

A neat way of exploring that is the notion of it being like playing a game and having different difficulty settings - you can still win, but it's like fighting harder opponents. You need more skill, luck or judgement, if you don't get straight-white-cis-man* as your difficulty setting at the start of the game.

I like that 'game setting' analogy, though I find it works better I you think of it less as a "easy moderate or hard" option at the start of a videogame, more like a boardgame where you roll dice and some players get an extra die or two. So you could still roll all ones and someone else gets fewer dice but is good at rolling sixes.

Now I just have to work out whether coming out of the closet as e.g. bisexual gets you an extra die for not playing with one hand tied behind your metaphorical back, or loses you one for gaining the encounters with prejudice you were previously avoiding.

Possibly it gets you a die with different numbers on it - say a four sided die with sides marked 0,0,4,8 instead of 1,2,3,4. The only bit of the theory I'm certain of it gets you one that's purple instead of grey.
Posted by Jen at 11:54 No comments:

Stonewall 100 and Bisexuals At Work

The "Workplace Equality Index" is one of the organisations key programmes these days, after 25 years of campaigning for, and sometimes against, legal changes to establish either lesbian and gay or LGBT equality.

Bisexual exclusion in LGB or LGBT spaces is nothing new, though there is an encouraging trend to address it in workplace staff networks. At BiPhoria, the UK's longest-running bisexual organisation, we've been working with employers and voluntary organisations on bisexual inclusion since the late 1990s, when the more switched-on groups started to address this.

Research over the past decade on workplace experience for bi people tells us two key things. First, that simply having an LGBT network in place made a big difference to how comfortable gay and lesbian people were about being out at work; but no difference to bisexual staff. Second, that while around 50% of gay staff feel they can safely be out at work, bi women are half as likely to feel they can be out at work as are lesbians or gay men - and bi men only half as likely again. When seven out of eight bisexual men feel they need to mask their sexual orientation to get by at work, we've still got a lot to do.

To me, that reflects the wider 'gay scene' where in the 80s and 90s there was widespread prejudice towards and exclusion of bi people. Back then Unison's lesbian & gay network expelled bi members, the London Lesbian & Gay Switchboard would not let bi volunteers work on its phonelines, and bars on Manchester's Canal Street had "no bisexuals" door policies.

There has been a tendency when moving from "LG" to "LGB" or "LGBT" organising to welcome the "gay side" of bisexual people - which of course we don't have, any more than an English person is just a Welsh side and a Scottish side put together. We're entirely bisexual.

But if your LGBT group is having a women's night out and your lesbian colleagues can bring their girlfriends, do you feel you can bring your husband, or do you feel a bit less welcome?

If your posters and policies in the workplace talk about homophobia and transphobia, are you challenging biphobia - including biphobia from gay and lesbian staff?

What can employee networks do?

- Understand that you don't start with a clean slate: for example Unison's LGBT group spent several years getting from the initial change from LG to LGBT to having a thriving bi network, because they had to undo the effects of past bi exclusion.
- Collaborate with local bi organisations around the country like BiPhoria. There's a list of them on the Bi Community News website.
- Put Bi Visibility Day (September 23rd) squarely on your activity plan for the year alongside events like Trans Day Of Remembrance.
- Be conscious about language; it's easy to slip from "LGBT" into "gay", yet it sends a message about which parts of the LGBT communities are welcome and the centre of your attention.
- Assume some of your staff are bisexual. Including some of the people who you've read as being gay or straight.
- Outreach work such as advertising in bi press like Bi Community News, sponsoring or otherwise supporting events like BiCon and BiReCon.
Posted by Jen at 10:51 No comments: