To queer or not to queer?

News blog the Huffington Post has rebranded its "Gay Voices" sections as "Queer" rather than gay.

Just in the time I've been around the LGBT+ scene, Queer has an interesting history.

A lot of people - mostly older than me - hate it. Understandably so, it was one of the sticks people were hit with time and time again. All LGBT words have that for some people and some contexts; just look at the gap between being bisexual and owning the label, or the use of gay as a playground slur, perhaps best challenged in a deconstructy way by the "homophobia is gay" campaign.

About the time I first came out, queer was being touted in some quarters as the "avoid saying LGBT cos it's got no vowels" word.

Then it became a corporate branding word for a trendy pink pound end of the scene. Queer as a synonym for under 25, white, cis, able-bodied, homosexual and at the gym every morning to keep yourself a buffly honed gay thing.

Later it popped up again as seeing your sexuality and gender as part of another narrowly conforming monoculture, this time tied together with other attitudes like v*ganism and anticapitalism.  Again, and for all its rhetoric, it was a "you're young or you're invisible" scene.

And now somewhat back to where we started. Or rather, where I came in.

Queer is, in the round, more inclusive than Gay. So this is a good step forward.

The qualm I have about queer replacing the "alphabet soup" is one I set out here a few years ago: by combining all the labels into one generic term we lose some of the strength of voice for the different strands that are submerged. If an LGBT group is kind of spelling LGBT as GGGG or LGGG, does changing to queer make the multitudinous identities of today feel more included, or mean the hierarchy of inclusion and action is harder to challenge?
Posted by Jen at 10:25 No comments: 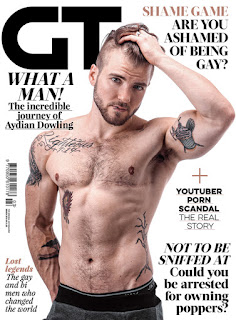 Good to see that monthly inky mag Gay Times has a trans person on the cover for the first time.  The lesbian and gay press has been dawdling on such representation for far too long.

Certain other queer mags got there years and years ago, I am obliged to say, but every little helps!
Posted by Jen at 10:19 No comments:

Email ThisBlogThis!Share to TwitterShare to FacebookShare to Pinterest
Labels: it gets better, trans, visibility

Lord Roper and the Hippos

This week I was in That London to attend (Lord) John Roper's funeral.

For one reason and another I never got to meet him (though I was a handy route for someone we both knew to come out to him - through the phrase "I'm dating Jen Yockney, Chair of DELGA*") but he had a splendid and vibrant political activist's life spanning five decades. Failing health meant taking his leave of the Lords last summer, and he died ten days or so ago.

At the service (Lord) Dick Newby spoke about John's vital work in the 70s during the EEC membership referendum, as organiser of the Labour rebels, making sure there were just enough Labour votes in each division that the UK would go on to join the EU despite the strength of the Tory rebels on the other side.  He would be one of the key players in the SDP and then a Lib Dem peer after the merger.  Thus two of the 'gang of four' were in attendance at the funeral, along with a plethora of Liberals from the red benches.

Others will write in more detail and far more eloquently than I could about his life and his passing. But they might not mention this: at his funeral, each guest was invited to take away one of the hippos from his huge collection of hippo toys.  Here are just a few: 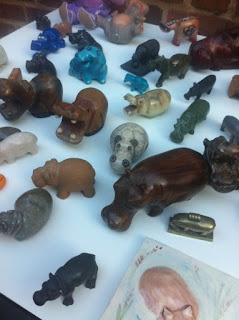 Mine is a pair of hippo bookends.

I found my copy of the memorial service book from dear Becky Taylor the other day, which brought forth a tear or two, but this is a splendid alternative way of having something by which to remember someone.