A Decade On: Bi Life in Manchester

The conference where the "Bisexual Life in Manchester" report was launched was held on 29th September 2003.  Ten years ago today.

This was the first bit of 'proper' research on bi needs that I did with BiPhoria, as part of a broader LGB&T project for the local Local Strategic Partnership. This was qualitative focus group interview palaver, with an enormous amount of transcribing (I'd never done that before) and only a loosely formatted Word document and a set of Powerpoint slides in time for the launch rather than the prettified edition that's on the BiPhoria website.

The report had little immediate impact, though, as in line with Manchester City Council policy in 2003, the overarching Local Strategic Partnership ruled bisexuality to not exist: we in the LGBT LSP kept sending in documents marked "LGBT" and they kept coming back marked "LG". Though it's shifted a little in recent years, Manchester City Council worked damn hard to earn a reputation for biphobia.
Posted by Jen at 11:07 No comments:

LGF asked me for a news writeup of Bi Visibility Day. Lots of what it promoted were events in the days before the 23rd, so it was frustrating that it only went live on the 23rd, but maybe that'll remind me to have all the things ready a month early next time! Here's what it ended up saying when it went live on their website here.


Monday 23rd September is the 15th Bi Visibility Day, with bisexuals and allies organising events around the world and awareness-raising online.

"In the 90s when most lesbian and gay organisations moved from ‘LG’ to ‘LGBT’, there was an awareness that trans - being about gender rather than sexuality - was a new area of work.  Often there was less work to address bisexuality as distinct from homosexuality." says Jen Yockney, chair of BiPhoria – the UK’s longest-running bisexual social & support group. "But last year's Bisexuality Report helped crystallise how and why it is different for bis for campaigners and policy-makers"

Two key challenges for bis are biphobia and invisibility, and September 23rd gives an opportunity to challenge the one through breaking down the other.  Biphobia is a complex issue, says Jen: "It comes in many flavours - that which is analagous to homophobia and heterophobia, with added suggestion of deception and indecisiveness. But there is also biphobia from how organisations and society is structured, that silences and erases bi experience.  And the internalised biphobia that makes us not want to own the ‘b word’ as a label, due to the negative connotations ofbisexuality that we have absorbed from the culture around us."

Biphobia takes its toll: research shows bis are significantly less likely to feel they can be ‘out’ at work than lesbians and gay men, and facehigher incidence of mental health issues too, perhaps linked to the pressure to be ‘one thing or the other’.

Bi meetups and events like BiPhoria, BiCon and Birmingham’s upcoming BiFest give a rare breathing space from that pressure.

In Manchester there is a celebrate bisexuality event organised by BiPhoria at The LGF on Sunday 22nd from 2pm-5pm and a bi quiz downstairs at Taurus from 6pm.

On Monday 23rd the Co-Op have a grand reception in the evening at their national HQ, with speakers from Bi Community News magazine, the BiUK research group, and LGF.

Meanwhile LGF has a film screening on Wednesday 25th.

You can find all those events and find out more about Bi Visibility Day at www.bivisibilityday.com* and about BiPhoria at www.biphoria.org.uk
Posted by Jen at 19:45 No comments: 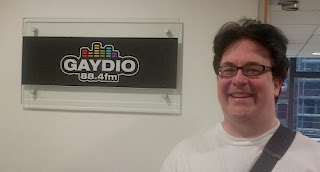 Part of my Bi Visibility Day frenzy of activity this year was doing radio spots. I found myself on radio in Shropshire and Norfolk and twice nationwide on Gaydio talking about the challenges facing bisexuals and the reasons to celebrate on September 23rd. By the third one I was probably fairly coherent!
Posted by Jen at 12:31 No comments:

BiCon is, we all know, Bisexual Christmas. We who celebrate it travel all over the country to go and see loads of people we never see the rest of the year, old friends, new members of the extended family, some of them drive us up the wall, one or two we hope to get smoochy with under the mistletoe*. Over the festival, we drink too much, forget our normal eating patterns and after several days return blinking and the worse for wear to normal life.

Therefore today - a bit later in the calendar and more of a one-day-binge without the big travel arrangements - is Bisexual Easter. And that makes having a creme egg for breakfast totally legit :)