Remember when Labour decided 5 more years of kids growing up under section 28 was worth it for a slightly easier ride from the Daily Mail?

It's not the story Labour-leaning groups are giving us on the tenth anniversary of the abolition of Section 28, but the infamous clause has at its inception and abolition two of the moments that kept me from being a member of the Labour party even at the height of Labour popularity in the mid to late 90s.

Section 28 made homosexuality a thought crime, a terrible but brilliant move that it would be nice to think was only possible off the back of HIV hysteria. A splendidly vague law that could be argued to prevent anything homophobes in positions of power wanted to stop happening, it was used to block information for schoolkids and bar newspapers appearing in libraries.  In those pre-interweb days, it helped isolate a generation of queers just as homophobic myth and hate was at a crescendo.

In the late 80s when the Conservatives unveiled Section 28, Labour's instinct was to tack with the popular mood and support its introduction.  In those early days of the bill, only the Lib Dems opposed it - at a time when the party was in such a mess it couldn't even agree on its own name. Much credit to those people inside the Labour party who managed to turn that around over time, but the kneejerk response of the reds went the wrong way. Popularity or all people equal before the law? Labour jumped one way, the SocialLiberalDemocraticExpialidocious party the other. 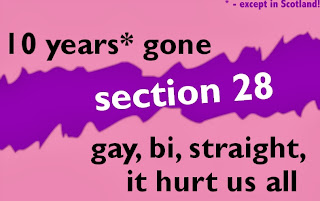 Come 1997, the country was in the mood for change and deep down we all knew this time the Tories were on their way out. The Lib Dem manifesto included repeal of Clause 28 among other equality commitments. Remember, back then you could be fired from your job or turned down for employment for being bi or gay. We had a discriminatory age of consent to keep gay men in their place and tell bi men that their mixed-sex relationships were more legitimate. Adoption, fostering, partnership recognition, so many things that are 'normal' now were a world away.

Labour didn't include repeal of Section 28 in their manifesto.  In the great tension of "what is right to do" versus "what will upset the Sun and the Daily Mail", they decided that keeping the tabloids on side was more important than the impact on isolated queers, including lots of LGBT and cishetero children growing up in schools that wouldn't give them the support they needed when they had questions about their sexual orientation or were being bullied because they were perceived as gay.

So when Blair got his landslide, Section 28 wasn't in the Labour manifesto. That meant repeal had to wait until the 2001-2005 parliament because the House of Lords, packed with prejudiced peers angry at their imminent removal from the House under Lords reform, unsurprisingly blocked repeal.

As Labour shadow ministers trumpet the great repeal of the Tories' Section 28 today, remember: their party actively chose to keep it in place for another parliamentary term, chose to keep it damaging schoolkids for another four or five years, for the sake of a couple of cheap headlines.

My crudest Anglo-Saxon lacks adequate words.
Posted by Jen at 12:02 No comments:

Email ThisBlogThis!Share to TwitterShare to FacebookShare to Pinterest
Labels: ldb 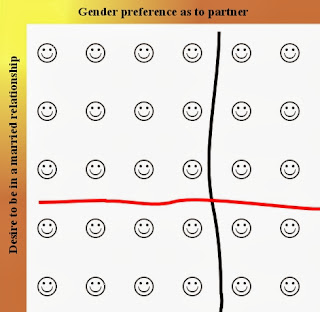 We've had an enormous amount of discussion of marriage in LGBT+ activism circles over the last couple of years. One of the semi-legitimate complaints is that the focus on this has passed over other issues affecting LGBT people (why I'm not persuaded of that is a tangent for another post). Another I've run into many times is that this change only serves the 'assimilationist gays'.

I'm not persuaded, and here's why.  My quick and dirty chart above considers the division of marriage up until legislative reform.  On the left of the black line, people who if they are to marry one person pick someone the law considers to be of the opposite sex; on the right, those who choose someone deemed of the same sex. (The law, at least in the countries I have lived in, remains a stickler for this binary thing).

But not everyone wants to marry. For whatever individual reason, all the people below the red line don't want to marry.

But we live in a culture of homophobia, and so people in the bottom left are pressured into marrying or else coming on the receiving end of homophobia through guilt-by-association: still not married, at your age? There must be something wrong and we all know what people who don't marry have wrong with them. Cue a variety of social ostracisation and for some financial penalties too.  Some will be assumed to be gay, others will marry for social acceptance.

Meanwhile on the right of the black line, at the top there are people who want to marry but are denied it, and at the bottom, people who don't want to marry (and may come to imagine a correlation between their distaste for marriage and their sexual preferences).

Now we redefine marriage as for any couple who want to marry.

This means the dividing line in marriage is not by sexual orientation but by choice.  No longer the black line but the red.

Those in the top right box are given the freedom over their own lives to choose to marry if they (and their prospective spouse) so wish.

Those in the bottom left box have the "it must be because you are secretly gay" assumption lifted. You could marry if you wanted; if you're not marrying it is because you choose not to, or the right person said no, or suchlike.

So I don't see same-sex marriage laws as 'just' liberation politics, and I don't see it as just for LGBT. It allows both those who wish to marry and those who do not to do the thing that feels right for them, without giving either the bully power to force their personal choice onto others.

Getting Bi in sound and vision

Lovely at the Manchester bisexuals meetup last night to have another new member say they'd got a lot from playing the audio/video version of Getting Bi before coming along to the group.

It does seem to have added a lot compared to the print booklet for some people :)