Of all the 'names' in sexuality theory his is probably the second best known to bisexual people and those with a wider interest in research around bisexuality.

Back in the late 70s, as I learned the story, he wanted to do some research and include sexual orientation as one of the variables measured. Yet when he went to look for suitable metrics, the only one on offer was that compiled by Alfred Kinsey back in the late 1940s: the "Kinsey Scale" that grades sexual orientation from 0 to 6 according to whether your attractions are more to members of your own gender or another.

Kinsey's line is pretty easy to understand - add up your partners and divide by the number you first thought of.  However this is painfully limiting: for example, by scoring the number of people with whom someone has had sex, you might get quite the wrong idea about someone who found their way into a particular kind of sex work, or who dare not act on their true attractions due to family or legal pressures.

Klein set about devising his own set of measurements, leading in 1978 to the "Klein Grid", a 21-dimensional measure looking at different aspects of life and the past, present and ideal states. It's less a number, more a couple of phone numbers complete with trunk dialling codes, but it does a far better job of accommodating issues such as sexual orientation changing over time, coming out in later life, or being better at pulling with one gender than another. It's still not perfect: like the Kinsey line it's binary in its model of gender and relies on the idea that gender is in some way a factor, and cannot account for things like preferences for a younger or older partner, fetishes, or whether attraction is romantically or sexually driven.  But like Kinsey, even where it fails it gives us a language to articulate around sexuality and attractions that we did not have before. For bisexual people especially this was a greatly empowering new lexicon.

My main personal memory of him is from BiCon 2002, arguing with me whether the bi movement should still strive for printed publications; he saying no, me saying yes. Broadly his position was that everyone had  private internet access so there is no need for the cost and grunt-work of print, while mine was that physical objects have permanence and tangibility. I think our different socioeconomic and geographic backgrounds meant we were coming at the question from two very different perspectives, but it was a happy and friendly argument.

Arguing their case and open to hearing the opposing view: it's a good way to remember someone.
Posted by Jen at 08:51 No comments:

28 years ago today, Section 28 became law. It was not the first thing to make me pay attention to politics, but in the end it would be the biggest motivator in going from armchair to activism.

One of the joys of life today is that when you talk to young people, even politically informed queer young people, you have to explain what it was. Often this is followed by some incredulity that people thought such a thing was OK, let alone a popular vote-winner, just a few years ago. Yet David Cameron got elected into parliament through a campaign that included attacking the politically correct rascals on the other side with their wicked intentions to repeal the law.

Section 28 as it would be known, Section 2A as it more strictly became once law, and "the clause" in popular parlance at the time it was going through parliament, was an amendment to the 1986 Local Government Act, which said:


Prohibition on promoting homosexuality by teaching or by publishing material.

2A“ Prohibition on promoting homosexuality by teaching or by publishing material.

(1)A local authority shall not—

(b)promote the teaching in any maintained school of the acceptability of homosexuality as a pretended family relationship.

(2)Nothing in subsection (1) above shall be taken to prohibit the doing of anything for the purpose of treating or preventing the spread of disease.

(3)In any proceedings in connection with the application of this section a court shall draw such inferences as to the intention of the local authority as may reasonably be drawn from the evidence before it.

(a)in England and Wales, a county school, voluntary school, nursery school or special school, within the meaning of the Education Act 1944; and

(b)in Scotland, a public school, nursery school or special school, within the meaning of the Education (Scotland) Act 1980.”

(2)This section shall come into force at the end of the period of two months beginning with the day on which this Act is passed.

In practice and in intent, Section 28 made homosexuality a thought crime, an act which Russia is busy proving to us was not solely possible off the back of 1980s HIV hysteria, though back in the 80s that probably helped. Despite the "homo" wording it was a bi and trans issue too, as there was such a deep lack of grasp of LGBT in the public consciousness back then.

It was a vague law - I remember hearing one Tory MP defend it to an LGBT audience claiming that as it was so poorly worded it didn't mean anything and therefore couldn't be homophobic in effect and did no harm. Fair play, if you're going to lie, make it a big one.

Actually the looseness of the language meant that it could be argued to prevent anything homophobes in positions of power wanted to stop happening. I saw it used to block information for schoolkids who wanted to know their human rights, to bar newspapers appearing in libraries, and to silence those who wanted to support people struggling with their gender or sexuality.  Even where there was support for gay people, it was used as an excuse to defend biphobia (to paraphrase but not by much, "section 28 means we can't give help or recognition to bi people, as that would encourage straight people to become gay")


It was a populist backbench Conservative bill introduced with Labour support, leaving only the Lib Dems on the other side of the argument. The Lib Dems had slightly more MPs than they do now but were still helplessly outnumbered. Knowing it was unlikely to be stopped outright, Bermondsey MP Simon Hughes brought forward changes that would have watered the measure down, but they lacked support beyond his own party. Labour's grassroots members started pressing their party's MPs to change tack and oppose the measure, but that took some time: and even if they could be persuaded, Margaret Thatcher was sitting on a majority of 100.

And so on May 24th, 1988 it became law.  It was the post-1967 nadir of LGBT equalities in the UK, adding to a litany of inequalities: employment, age of consent, adoption, partnership recognition, pensions, housing and so on.


But it had a galvanising effect on the LGBT community, not least by giving lesbians and gay men a common cause to fight around. Like the baddy in any story, the politically active queer organisations and individuals it spawned would bring about its own downfall, and spur momentum toward the near-equality we have for LGBT people with straight cisgender people today.


It should have been gone in 1997 when the Tories left power, as the new government had pledged to a tight spending programme but here was something positive for society that could be done at no cost. Alas Labour chose not to include repeal of Section 28 in their manifesto.  In the great tension of "what is right to do" versus "what will upset the Sun and the Daily Mail", they decided that keeping the tabloids on side was more important than childrens' lives. That meant repeal had to wait until the 2001-2005 parliament as the pro-prejudice majority in the Lords blocked repeal. As it wasn't in the manifesto, Labour felt they couldn't overrule the Lords on the subject.

It went in Scotland in 2000 though - one of the prices of coalition the Lib Dems extracted from Labour at Holyrood; in England and Wales it would stick around until 2003.

I was a teenager in 1988, and though I had newspaper cuttings about the clause on my bedroom wall I no longer remember the day the clause became law. I remember the day it went though; for a little while I thought: we have won, it is ended, I can stop fighting now. Then the next day dawned and there was still far too much wrong in the world to rest just yet.
Posted by Jen at 07:06 No comments:

Manchester has crawled back from being a one-party state, with one solitary splash of change in the scarlet council map.

As ever, it's a Gold Left / Red Right city, liberalism versus entitlement.  You picks your team...
Posted by Jen at 11:36 No comments:

Nicola in the Stylist

My second favourite punnily-titled publication is the Stylist... or is it the StyList? Nowhere on my daily commute dishes it out alas but I often find it in the local takeaway, so I have just been enjoying this week's interview with bi boxing champ Nicola Adams.

Pick it up free somewhere that it's free, while you can! 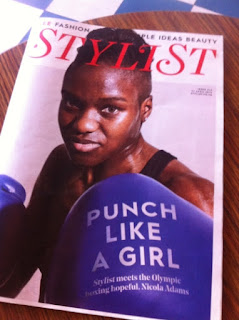