This is the story of going to my third 'zine culture' event, the 2014 Sheffield Zine Fest. 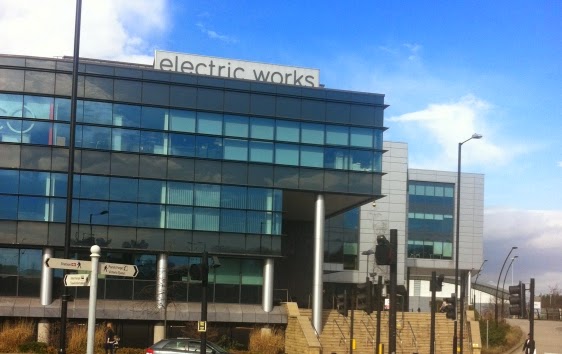 This is the station. Here is the train. I'm so very late, I meant to get up early for this one but then I accidentally fired up Civilization V on my PC at about 8 o'clock last night and... well, you know how that goes. The train gently climbs up into the Pennines; we've had no snow this winter so the hilltops are clear where last year they were white. The person sat opposite me has fabulous hair, blonde and black somehow fading from one to the other in a way that evokes bumblebees in an adorable fashion. I decide this is a good omen for the day. 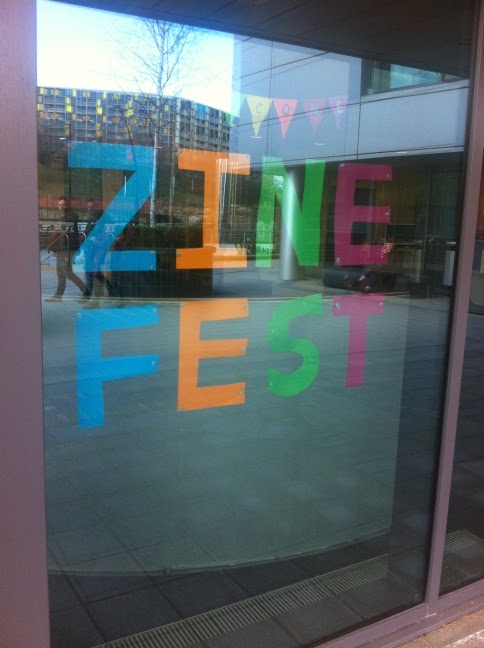 Despite being generally fairly good with geography, I'm rubbish at remembering which is which with different towns in Yorkshire and expect it to take as long to get to Leeds, so am surprised when all of a sudden here is Sheffield with its pretty primary-coloured trams.  Always nervous of food at events I stop off for a kids meal at burger king on the station, getting a pair of big pretend spectacles as my toy. I'm not sure what I make of them.

Across the road to the electricworks, a gorgeous shiny new building. The signage is good - if I didn't already know, it's clear from these that I'm in the right place. There's a helterskelter in the reception area that you need to go up to something like the fourth floor to use; I have shocking vertigo (really - I have to psyche myself up to stand on a chair to change a lightbulb) so last year this just scared me, this year I took more time to look at it, and maybe next year I'll take a ride down it. Though it'll be best if that's when no-one of a nervous disposition is nearby as I might take a few minutes after coming to a halt to stop crying or screaming. 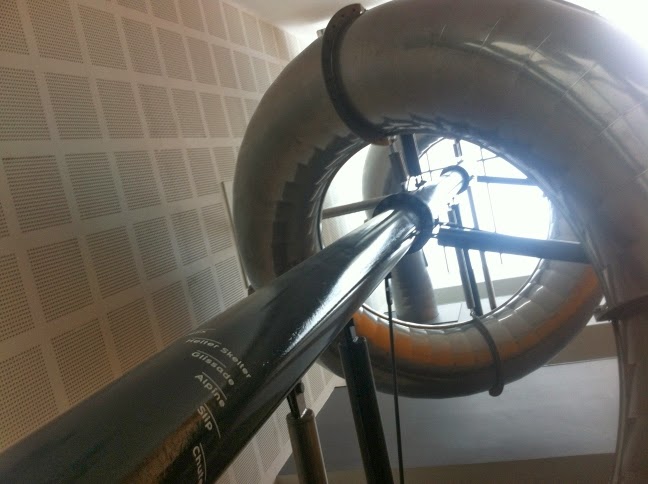 Past the slide and into the two main rooms. We're in the same space as in 2013 but the layout is different this time; I think it works better.

There are probably more stalls, certainly there is more room for stalls, and still a fair amount of chillout space.  I think losing any more of the remaining chill space would be bad, but the extra stalls make it feel more lively taken in the round. 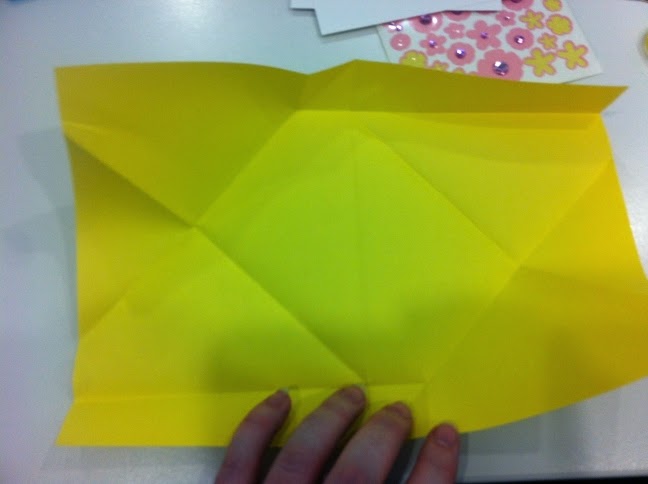 There seem to be more, and more varied, workshops than the year before. I'm not knocking last year's, don't get me wrong - I adored Cath's feminist zinestering session but I think it was the only session title that I felt motivated to go along to.

This time I want to go to at least three; the first is standing room only so I let it slide, the next is a "mail art" workshop which I do get along to. After that there are two more sessions and I decide to go to the one not run by the facilitator of the mail art session; not because they weren't nice or anything like that, just to try and mingle a bit more widely. Alas the previous workshop in room 2 has over-run by about half an hour and so I let my aim of attending this one go too. Still, the workshops do seem to be very popular and they work well for the likes of me in getting me talking to other people. 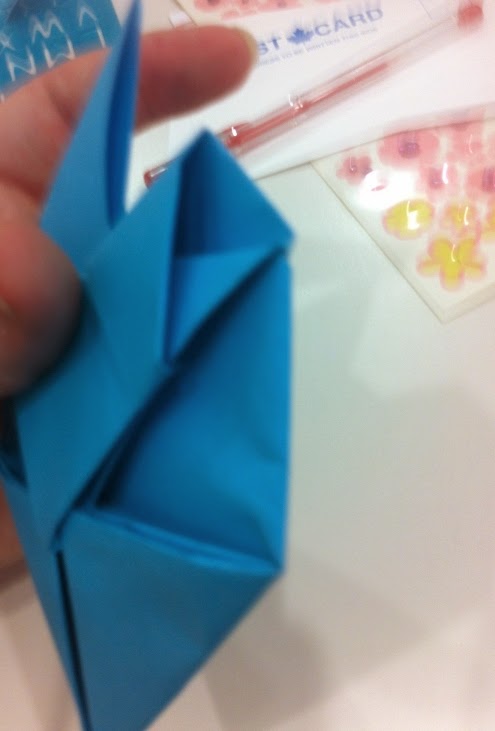 Speaking of the mailart session, this is where I finally learn how to turn two of the recipes in the origami book that I won at the BiCon 2013 Pass-The-Parcel workshop into successfully folded bits of paper!

Beware I may be sitting on trains for the next couple of months carefully folding sheets of A4 to use for some eyecatching flyer or other using the techniques learned.  I just need some kind of event or survey to want to promote...


The actual sessions are in two workshop rooms.  I don't see anyone use workshop room three but it's been set up around a neat idea, a little quiet corner of zinester heaven with typewriter, longarm stapler, guillotine and suchlike in it. 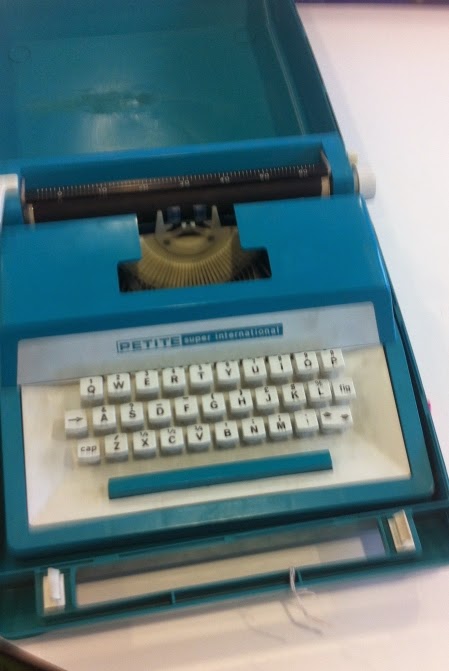 One of the things I notice is a fair sprinkling of things pitched at child involvement and several children bobbing about the place. I'm not sure if this is actually more than last time or if I'm just noticing it this time.

There's so much variety in an event that seems to be bringing together many subcultural strands in one place.  Fringe political voices; feminist zines; music zines, which I don't touch now but a billion years ago were one of my two introductions to small press culture before I found feminist and queer zines; things I somehow remember now as "normal zines", which are probably mostly perzine stuff often about growing up; art prints and terribly artsy things that I wouldn't go near but are clearly exactly what chimes for some others.  It's interesting to hear people during the day describe different ones of these subcultures within Sheffield as being especially male or female spaces.

I'm reminded of my learning from last year: at a fair like this the zines really really need some kind of explanatory label next to them that outline what they are about and who they would appeal to. A clever name and the writer's favourite kind of paper and ink isn't enough, unless you are a regular reader of that zinester's work. "This is about teenage crushes looked back at from the safety of my 20s" is grand and quickly tells you if this is your sort of a thing. 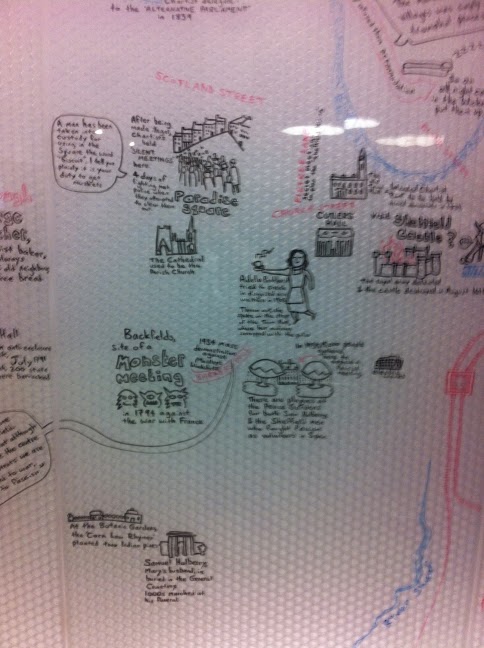 As last year there are some nice touches to take it beyond just being tables with zines and a workshop room. Someone is using the huge glass walls to draw a map of Sheffield and its surrounds with stories of the social-political history of the area. It's interesting as I know quite a bit of this kind of thing for Manchester but not for the other side of the Pennines; there is lots of overlap as the same laws and social battles were being fought for people across the North and most of the country, but the names and places are all a little different. And as with last year's 1913 history wall, it gives you something to do if you're a bit scaredy of talking to all the cool kids.

A stall has badgemaking for 50p a pop - this is always a winner at events - and a fun game of write / draw consequences that impresses me greatly with its simplicity and potential for turning into a display later in the day. 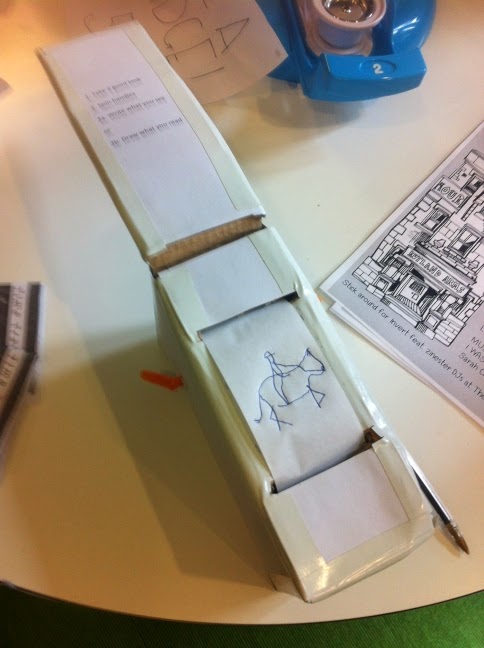 I find and buy Cath's new zine, and find Tracey's zines and take a promised photo of them "seen in the wild". Photos for this blog are a good icebreaker of tidy manners; can I snap this, I promise you won't be in the shot is enough like the photo protocol at bi events that I know how to say it, and gets you talking with the people whose stall you're visiting.

I pop a couple of BCNs on the freebies table, which is a blur of a few zines and quite a lot of flyers for things. BCNs don't look very "zine culture" though, and the two are still there when I head off home around five. They'll keep for another table the organisers host somewhere else, I'm sure.

The evening has some more ace sounding things lined up, but feels like a space where I'd want to have one or two friends there or to have a role like taking donations on the door, and besides I have my own other plans for the evening back home. 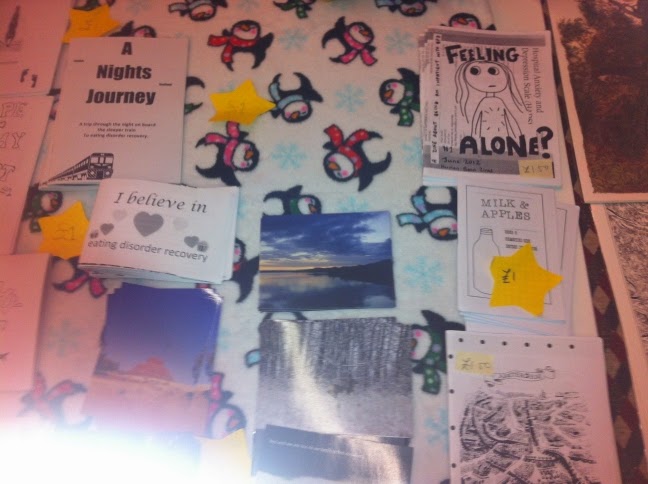 On the way back across the Pennines to Mancashire I think: if there is another of these next year I really must take a table and fill it with queer zinery. Not many people will want them due to the peculiar mishmash of social circles that come to ZineFest, but being there feels kind of important in outreachy ways. It will mean hauling myself into writing some of those "bubbling under" zines that I keep meaning to distil from bath rants to actual words on paper.