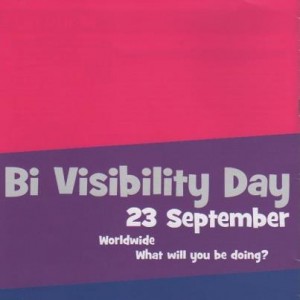 While putting together BCN issue 114, I wanted to focus a lot of attention on Bi Visibility Day. The magazine was coming out in mid August so there would be about four weeks for readers to make something happen for the 23rd: past experience says that with the wind in your sails that is only too acheiveable.

So the back cover got a full-page and colourful advert for the day, seeking to encourage people to come up with plans and share them with a "what will you be doing?" tagline.

It worked a treat. Well, to be fair the momentum's been building for years - this was a helpful nudge at the right time.

What was intriguing though was that the advert took off - I keep finding it (see image) on things around the world, usually like this with the september23 URL frustratingly clipped off. Facebook, blogs, the Advocate and more.

It's pleasing to see it being used all over the place. It'd be nice if more places credited it to BCN though.
Posted by Jen at 10:20